In October 2019, the IGN FI – BRLi consortium was awarded the regional contract to assess hazards, vulnerabilities and risks in the Member States of the Commission of the Economic Community of Central African States (ECCAS). This is the international organisation for the economic, social and cultural development of the following Member States: Angola, Burundi, Cameroon, the Central African Republic, Chad, the Democratic Republic of Congo, Equatorial Guinea, Gabon, the Republic of the Congo, Rwanda and Sao Tomé and Principe.

Financed by the European Union within the framework of the ACP-EU programme to strengthen resilience to natural hazards in ECCAS, and managed by the World Bank’s Global Facility for Disaster Reduction and Recovery (GFDRR), this project involved organising a regional workshop held by videoconference on 29 and 30 March 2021. The workshop marks the end of the project.

Held over two half-days, the regional workshop to approve the Cartography of Natural Risks in ECCAS Member States took place on 29 and 30 March 2021 by videoconference, in view of the COVID-19 health situation.

Dr Honoré Tabuna, Commissioner for the Environment, Natural Resources, Agriculture and Rural Development, spoke on behalf of His Excellency Ambassador Gilberto Da Piedade Verissimo, President of the Commission of the Economic Community of Central African States (ECCAS). In his opening address, he highlighted how demographic pressure, unplanned urbanisation, loss of biodiversity, climate change and degradation of soil and ecosystems were having a heavy impact on the daily lives of the 182 million people living in the 11 Member States of central Africa. Since 1970, sub-Saharan Africa has experienced over 2,000 disasters, just under half of them in the last decade. The most frequent disasters in sub-Saharan Africa include floods, droughts, cyclones, earthquakes, landslides, volcanic eruptions, coastal erosion and epidemics.

The second day consisted in presenting and approving the various project deliverables, including the ECCAS Risk Atlas produced as part of the project. This atlas outlines risks at two different levels: firstly, it presents the major hazard types and their geographical distribution in ECCAS (river flooding risks, geotechnical risks, climate risks and risks specific to coastal areas); secondly, it includes a focus on the main cities in the area and their specific risks.

Camille Pinet, project manager at IGN FI, says: ‘We have ensured that the results are as clear as possible and can be used by all types of user, from experts and technicians to decision-makers, including the general public.’

In addition to the atlas, all of the data collected and produced as part of the project has been organised into a database and made available to ECCAS, so that it can be used in the future by the experts responsible for continuing the work.

Marie-Christine Germain, project director at BRLi, says: ‘this unique knowledge base will enable all Member States to improve their knowledge of risk in accordance with the specific features of each region and therefore to create regional or national strategies in the areas with the highest risk exposure. In particularly sensitive areas, detailed specific actions can be developed to reduce risk, injury to persons and damage to property’.

As Semingar Ngaryamngaye, Regional Coordinator in Disaster Risk Management and Climate Change Adaptation (DRM/CCA), points out, this project is not an end in itself. The study is a step along the way and is not sufficient for the creation of Risk Prevention Plans (RPPs). The atlas is therefore the initial basis for a structure summarising the knowledge needed for risk prevention, which must be based upstream on education and must form an integral part of the sustainable management of areas prone to significant socioeconomic and environmental change.

At the end of the workshop, the participants confirmed that it had been interesting and drew attention to the importance of training and knowledge transfer to national teams so that the data can be used and regularly updated.

The workshop gave participants the chance to comment on the content of the atlas and provide additional regional or local information.

This additional information, submitted at the workshop and during the days just before and after it, constitutes a valuable contribution to the project’s deliverables and will be included in the project before the final version is published.

Once it has been approved, the atlas will be delivered to ECCAS in digital format and in hard copy.

In total there were over 40 participants in the discussions (DRR [disaster risk reduction] focal points in the Member States, representatives and experts, and authorities and institutions responsible for disaster risk management). 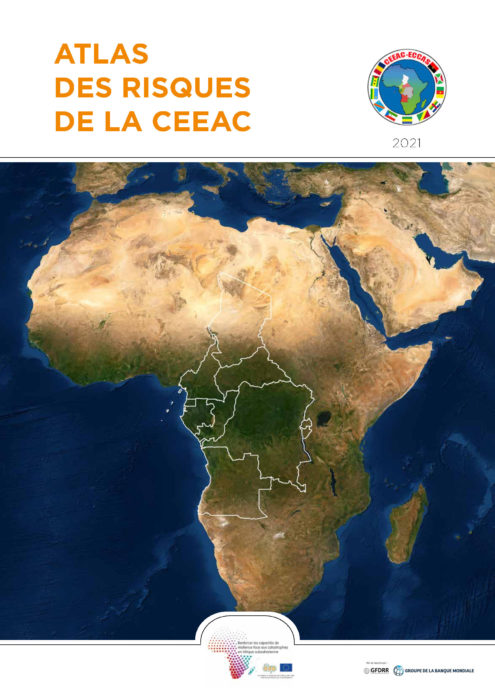