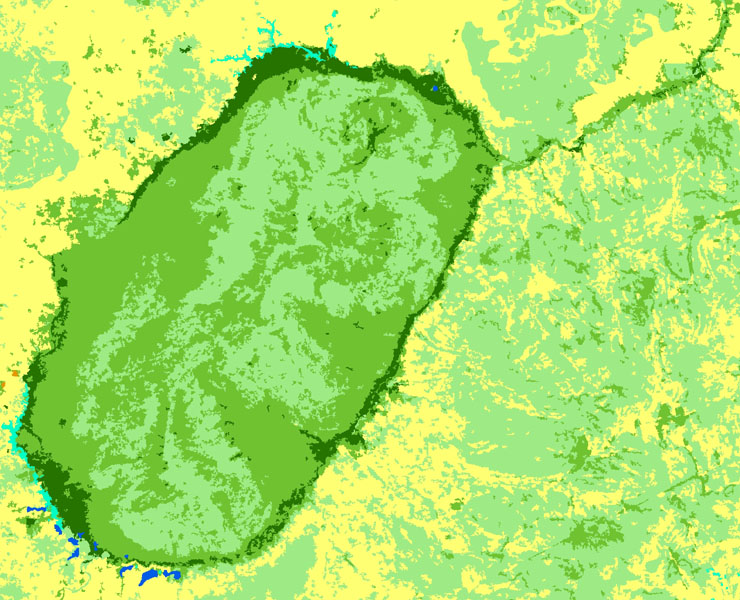 Burkina Faso has possessed a database on land use compliant with a scale of 1:100,000 since 2005. This database was created by the IGB (Burkina Faso Geographic Institute) in collaboration with IGN FI over the period 2004-2005 for the direct benefit of the PNGT 2 (National land management programme), a programme run by the country’s Ministry of Agriculture. This biophysical land occupation inventory called BDOT1992 and BDOT2002, adapted using European experience gained from CORINE Land Cover, contains more than forty types of land use is linked to a database tracing changes from 1992-2002 « BDOT_Change1992-2002 ». It provides precious information on land use and its evolution over the decade for the whole of Burkina Faso.

The changes in needs expressed by the client concerning surface thresholds led IGN FI to rethink its entire methodological process as well as the strategy for creating this new 2012 version of the land use database. In order to best meet the client’s needs in the required timeframe, the following three parameters had to be adjusted: the surface threshold, the nomenclature, mapping methodology. This resulted in the surface thresholds (MMU), originally set at 25 ha for BDOT2002 and BDOT1992, being lowered, sometimes to under 1 ha in the case of forest categories. This was the reason why a new BDOT2012 was created.

The method used to create BDOT2012 was based on semi-automatic processing of RapidEye satellite images. Rules for mapping and the nomenclature used were defined in partnership with the Burkina Faso partners.

For the test phase on pilot sites

For the production phase over the whole territory